Home › Jandoli Institute › ‘All in the Family’ Turns 50 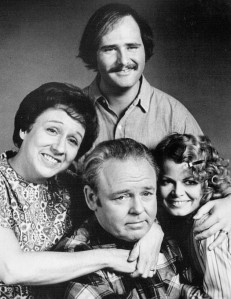 Fifty years ago today, All in the Family premiered on CBS.

Through comedy, the show addressed racism, sexism, war and other issues in a way that no previous sitcom had done.

Norman Lear, who created the show, still is going strong at 98. In a CBS This Morning segment on Sunday, he offered some advice for our troubled times:

“We are in this lifetime together, and maybe it’s possible to appreciate the other guy for the way his mind works, even when he’s not working your way.”

Richard Lee, executive director of the Jandoli Institute, is a former music journalist who often writes about the intersection of entertainment and public policy.