No need to prolong a long national nightmare of recrimination 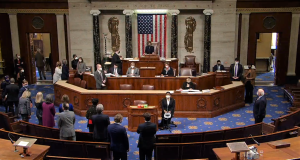 It will end as it began with agony and patriotic excess. It is true that in the last year the president and his enablers have shown a deep disregard for constitutional government. Now we are facing a series of alternatives that are confusing.

Can one really impeach a man after his term is done?  Can we really use the 25th amendment and cast him out?  The amendment is really meant more for disability than constitutional abuse of power. Can we indict a president for acts done while in office if he is gone?

Historian Eric Foner of Columbia University has supported invoking the 14th amendment to ban him forever from future office. I like that and also a joint resolution of censure as was done with Andrew Jackson.  Whatever we do it is to make a strong symbolic statement. But we do not need to prolong a long national nightmare of recrimination.

I am troubled that we abridge freedom of speech in our legitimate desire to purge ourselves of Trumpism. Our historical experience with sedition has not been salutary in the federalist period and during World War I. There is clearly more to this story than a bunch of disaffected white men in baseball caps attacking a sacred building. There are hosts of enablers from senators to the pillow man to even Clarence Thomas’ wife, who laid out the parameters to this attack on democracy. With our delays of law, the nation could spend the entire Biden term seeking out each act of true disloyalty. Instead we must let the sunlight illuminate what the discontents are and move to bring us back together.

Michael P. Riccards, a former college president. is the author of 30 books, including a two-volume history of the presidency, The Ferocious Engine of Democracy, and the recently published Woodrow Wilson as Commander-in-Chief.

Like Loading...
‹ ‘All in the Family’ Turns 50
We must lay before the world that we remain a people of law ›