Missing the point of the State of the Union 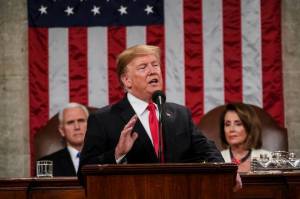 An online search of the State of the Union yields 2.9 billion results. What do the results have in common? House Speaker Nancy Pelosi ripped up President Donald J. Trump’s speech. Trump refused to shake Pelosi’s hand as he walked onto the podium. Trump awarded the medal of freedom to Rush Limbaugh. A Parkland shooting victim’s father was escorted out of the State of the Union audience for his outburst about gun violence.

An analysis of State of the Union coverage showed that most of the headlines had nothing to do with the content of the address and mainly discussed the drama that occurred throughout the evening. The Constitution states that president is supposed to share information with Congress about the status of the country and key issues facing the American public. Another objective of the speech is for the president to propose solutions for the nation’s problems.

During his speech, Trump asserted that the economy was the “best it has ever been.” He claimed to reverse “years of economic delay and failed economic policies.” He characterized Democrats who support universal healthcare as “socialists.” He bragged about his choice to order the killing of the top Iranian Commander Qassem Soliemani. He promised to protect patients with preexisting conditions and claimed that health care plans were less expensive during his administration. There were few moments in the evening that generated applause from both sides of the aisle, such as when Trump commended Venezuelan leader Juan Guaidó on his efforts to restore democracy.

The media missed the mark on covering Trump’s policies and future propositions, deciding to focus on the theatrics of the event instead. Unfortunately, the main takeaway from the address was that Pelosi ripped up the president’s speech.