Biden’s age was another of yesterday’s historic firsts 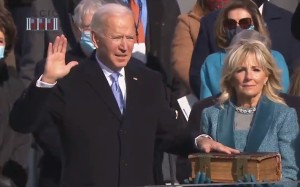 As we were reminded often yesterday, the inauguration was a day of firsts.

“We celebrate our first African-American, first Asian American and first woman vice president, Kamala Harris,” Sen. Amy Klobucher, co-chair of the inaugural committee, told the crowd at the start of the ceremony.

But the ceremony also featured another first. When he took the oath of office, Joe Biden became the oldest person to serve as president of the United States.

Biden’s age is no secret, but it generally is not spoken of in positive terms.

Instead of poking fun at the president’s age or questioning his competence, why not celebrate the fact that not only are people living longer, but they are leading productive lives into their older ages?

The list starts with Paul McCartney, Harrison Ford, Martin Scorsese and Barbra Streisand, and it doesn’t end with septuagenarians.

And let us not forget Betty White, who celebrated her 99th birthday last week.

Yes, Joe Biden is 78. No person of his age has ever held the highest office in the land. But historic firsts are part of America.