Carter/Ford debate offers a lesson for 2020 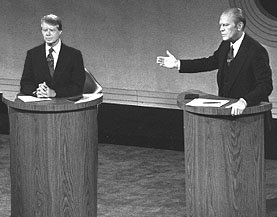 Shortly after the first presidential debate, it was announced that President Donald Trump and several members of staff had contracted COVID-19, the disease that has been sweeping the world for more than six months. This close to the election, it is clear that his reaction to the disease will play a major role in the outcome, influencing the vote of many undecided people left confused after the first debate, which was undeniably devastating to both sides of the race. I speculate that his reaction will be much like what Gerald Ford and Jimmy Carter did during a 1976 debate, where he has no option but to show strength.

To elaborate, during the Ford v. Carter debate, hosted September 23, 1976, the audio suddenly cut out. On television, news broadcasters assured viewers the technical difficulties were temporary and would be fixed soon.

Both candidates were offered chairs to rest while the technical difficulty was corrected, but both refused to sit first. Instead, both candidates stood frozen in place while the audio was fixed. This was done as a political move.

Ford later recounted the event in an interview with Jim Lehrer: “Both of us were hesitant to make any gesture that might look like we weren’t physically or mentally able to handle a problem like this.” What Ford was saying was neither candidate could afford to appear less capable than the other, and sitting down first, though perhaps irrelevant to most Americans, could change the perception of the candidates.

I believe that President Trump contracting COVID-19 has put him in the same position. He can either power through the virus and appear strong and capable or he can shrink away into quarantine, as doctors outside the White House physicians would recommend, and appear incapable. At such a crucial moment in the election with polls as fast-moving as they are, this one event could prove to be more significant than meets the eye.

President Trump has already made steps to include himself in the former category. On Oct. 5, it was announced that he was no longer showing symptoms of coronavirus and would be returning fully to work in the White House. In his statement, he called on Americans to no longer be afraid of the virus.

Of course, the symptoms vary from person to person, but such a speedy recovery was a shock to all, especially when just days before that it was reported the president had to take oxygen. It equally bears mentioning that President Trump held a photo session in which he showed he was continuing Presidential work from his care facility, an equally strong way to assert capability.

While the exact effect of the president’s contraction of the coronavirus will likely remain unknown until well into the future, it is worth speculating now, as well as drawing on any remotely related historical examples. With the nation in full election swing, any one event could change the tide. Whether this will be it, and whether President Trump’s show of capability works, remains to be seen, but he has certainly taken the most beneficial step in coming out on top of the virus.

Dominic Gismondi is a student in an honors “Campaigns, Candidates and Current Elections” course at St. Bonaventure University.