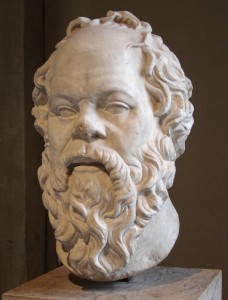 So, for example, if it is true that:

Why?  Well, for one, there may be no traffic. So there is nothing to block.

On the other hand, if there is traffic and the traffic is stopped at the bus, then it is true that the bus is blocking traffic.  But it doesn’t logically follow that:

Why? Because the statement above is ambiguous. It could mean that the bus driver intended to block traffic and that is why she parked the bus there. Or it could mean simply that the actions of the bus driver caused the traffic to be blocked, in which case the intention to do so may or may not have been present.

Socrates would object to drawing a conclusion from the fact that a bus is parked at a ninety degree angle across a street that it is blocking traffic or that it was parked there with the intention to block traffic. Such a conclusion goes further than the evidence allows.

Sherlock Holmes, on the other hand, regularly draws less than foolproof conclusions because he relies primarily upon inductive inferences, reasoning from samples to generalizations or from less than universal generalizations to specific instances. This sort of reasoning leaves room for error, which is why, for example, polls are usually correct but operate with a margin of error. There is nothing wrong with this sort of reasoning, but in certain circumstances it can be problematic, especially when used indiscriminately.

Increasingly over the last two-and-a-half decades, news media around the world, but in particular in the United States, have reported news by drawing the sorts of inferences to which Socrates would take exception or by relying on Sherlock Holmes’s sort of reasoning in inappropriate circumstances.

Here’s a case in point.

It’s easy to see, given the bus example above, that the headline might go beyond the evidence. It would depend upon what further facts are supplied.

Anyone reading the headline would reasonably conclude that, if the headline were true,  Democrats are opposed to money for small business loans. Such a conclusion, technically, isn’t warranted by the headline because the headline itself doesn’t impute a motive to the Democrats. However, it suggests such a motive. And in this particular circumstance, such a suggestion is irresponsible.

The Democrats were not opposed to small business loans. In fact, they favored such loans, but they also favored  an additional $250 billion for hospitals, states, and local governments to fight coronavirus, spending that they knew the  Republicans would not approve if introduced as a separate bill. Their attempts to introduce such language into the bill were initially rejected by Republicans.

So the headline could just as easily have read:

Such a headline would also have been unwarranted and misleading. The truth was somewhere between. The headline might more accurately have been:

What did the so-called “liberal” New York Times write as its headline that day?

Even the “liberal” New York Times gave the slant to the Republicans. It could just as easily and more accurately have written:

Why is this important? Here is a conversation I had with a friend of mine that day. His comment to me on the stalled bill was, “One more week of Nancy [Pelosi, Democratic leader of the House of Representatives] screwing around over this money will put more of us out of business.” In short, headlines like these lead people to draw inaccurate conclusions about how our government is operating. Headlines like these increase anger in citizens needlessly and thereby undermine trust in government.

Here is another set of examples:

This headline is utterly misleading. It’s true that the coronavirus bill hit some hurdles, but Sanders wasn’t the first to place a hurdle in front of the package. The sequence of events was this: Four Republican Senators—Lindsay Graham, Ben Sasse, Tim Scott, and Rick Scott had objections to wording in the bill that might pay some unemployed people more than what they had been earning when they were employed. They threatened not to vote for it unless the language was removed. Sanders, who had been willing to accept the bill in its original form, then said that if the four Republican Senators object to that wording, he would object to wording about bailout money to corporations unless there were stronger language about them not laying off workers.

But the Fox News headline suggested that Sanders was the problem, even saying that he might “torpedo” the package. But they didn’t describe the Republican Senators’ actions in those terms. Fox News characterized the Republican concerns as completely reasonable, but they characterized Sanders’ concerns as simply an effort to “threaten” others and “torpedo” the bill. In fact, though, as with the previous example, it’s just more give and take, common to negotiations, and Sanders was willing to accept the bill as it stood. It was four Republicans who were stalling the bill once an agreement had been reached.

This is not news. It’s an opinion column disguised as news, and Fox News does this all the time.

Let’s take a look now at how CNN covered this, by way of comparison. What was their headline?

This, of course, is, in part, an attempt to paint Pelosi as someone who engages constructively in negotiations. But notice, they didn’t characterize Pelosi that way. These are her words. “What is important,” she said, “is for us to recognize the good that is in the bill, appreciate it for what it does. Don’t judge it for what it doesn’t do because we have more bills to come.”

In this instance we could conclude that CNN attempted to paint Pelosi positively though they used her own words in doing so. Fox News, however, attempted to paint Sanders negatively, but the words they used, ”threatening” or “torpedoing,” were not his words. They were Fox News’s words, and as such, their “reporting” isn’t worthy of the name. The reporting does not constitute an effort to accurately relay information to citizens of the nation. It constitutes editorializing disguised as news, based on little, if any, evidence.

For example, on April 28, 2020, one lead story on Fox News carried this headline:

CNN that same day had a story on Tara Reade, but the story said nothing about Reade “blasting Clinton for backing Biden.”

Without taking sides, it’s certainly reasonable to ask whether—or not—that story warrants the top of the page in that news cycle. It’s also fair to ask, given what we’ve seen above in Fox’s coverage, whether what she said “blasted” Hillary Clinton. In fact, she said that she had always been a supporter of Hillary Clinton but that she should not be “enabling predators.” Is that “blasting” her?

The New York Post that same day said nothing about Tara Reade in its major stories.  Neither did the New York Times.

On the same day, The Washington Post reported the following:

In other words, the U.S. plans to lend money to large corporations, money that they may use to increase executive pay or higher dividends to shareholders. This headline was on the front page of the business section, not the front page of the Washington Post. It’s fair to say that this half-a-trillion-dollar loan to big business is a pretty big deal. But a search for similar news on that day and the day after in the New York Times, Fox News, and CNN revealed no such information. But all of them carried stories about Vice President Pence not wearing a mask when he visited the Mayo Clinic.

The point is not that one outlet is right and that another is wrong. The point is that by their choice of stories, mainstream media in this country are editorializing, not reporting news. They have everyone discussing Pence’s propensity not to wear masks, and almost no one discussing a half-trillion-dollar bonanza for big business. And in so doing they are failing the American public.

The American public, if they were as wise as Socrates, would readily see through the misleading headlines and the attempts via choice of stories to manipulate opinion. But most citizens have neither the time nor the money to read and compare the various media outlets. Increasingly, too, citizens are beginning to rely on media that do not even speak to sources but simply pass off their editorializing as news.

Socrates would be dismissive of people’s reliance on any of these sources, including the mainstream sources, until they, one, straighten up and simply report that there is a bus parked across a street without editorializing without evidence on the motives and intentions behind the driver, and two, determine whether that story is more important than other stories that affect people’s well-being.

Barry L. Gan is Professor of Philosophy and co-directs the Center for Nonviolence at St. Bonaventure University. He has authored Violence and Nonviolence:  An Introduction; co-edited with Robert L. Holmes; Nonviolence in Theory and Practice, an anthology now in a third edition; and, for 26 years, edited The Acorn: Journal of the Gandhi-King Society. He has taught at St. Bonaventure University for the past 36 years, during which he taught news media ethics for12 years. His wife, Miaoli Zhang, was a microscopic photographer for Olympus of China.  He has a daughter, a son, and a stepson, all writers.

Watch a video presentation and discussion of this essay: