Did COVID-19 coverage focus on the right topic? 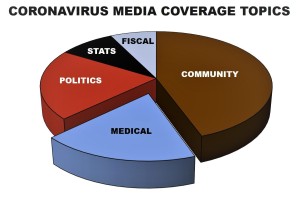 Stories about the medical aspects of the coronavirus – symptoms, precautions and treatment – accounted for less than a fifth of media’s coverage of the pandemic during a six-week period from late March through early May, according to an informal study conducted by students at St. Bonaventure University.

“The pandemic is a multi-faceted story, and it is important for journalists to cover every angle,” Jandoli Institute Executive Director Richard Lee said. “But from a public health perspective, the most critical information is what is contained in the medical stories.”

Students in Lee’s Media and Democracy class tracked coverage of the coronavirus in 10 major media outlets by logging and coding tweets about stories done by several news organizations during four separate four-day periods between March 26 and May 4.

Of the 255 tweets, 48 or less than 20%, were for stories concerning medical issues. Most of the stories advanced by tweets, 111 or 44%, were community articles about closings, cancellations and new services, as well as human interest stories.

Politics, which included coverage of press conferences, legislation and partisan charges, accounted for 54 tweets, 21% of the total. Statistics, such as the numbers of people infected, tests and hospital beds, amounted to 23 tweets or 9%. Fiscal issues, such as the economy, the stock market and the stimulus bill, totalled 19 tweets or 7%.

“The research was not a scientific study, but it provides a snapshot of the coverage,” Lee said. “And that snapshot shows that the coverage did not focus on the information most needed by the public to control the spread of the coronavirus.”

The students logged tweets from ABC, CNN, CBS, FOX, MSNBC, NBC, the New York Times, USA Today, the Wall Street Journal and the Washington Post. Each student was assigned to log tweets from one of the news organizations. During each four-day period, every student accessed the Twitter account of their assigned news organization at random times and logged the organization’s five most recent tweets.