Peggy Dudas: ‘We need to be constantly reminded of Kent State’ 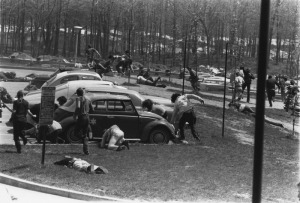 On May 4, 1970, four children were shot and killed by the National Guard.

I know we went out on strike over Cambodia, but I was still passing out fliers, making a speech (my one speech), and raising hell. The Douglass College faculty had voted to issue pass/fail grades. I am sure I would have failed the second semester of my senior year had it not been for the liberal faculty and their willingness to support us in a very positive way.

I was 21, newly married, and passing out fliers on the Rutgers New Brunswick campus. A student questioned why I was handing out paper when kids had been killed at a school in Ohio. He told me four students had been shot dead at Kent State University. I didn’t believe him. A few hours later, I believed him.

I detested Richard Nixon. I detested the Vietnam War. But I still believed in the broad-shouldered goodness of the United States.

On May 4, 1970, as parents mourned, my innocence walked out the door, replaced by cynicism and anger. I expected the worst, and as these last few years have shown, I got what I expected.

Peggy Dudas, a retired journalist, was active in Students for a Democratic Society while completing a degree in journalism at Douglass College at Rutgers, The State University of New Jersey.

Like Loading...
‹ John Stevens: ‘We need to be constantly reminded of Kent State’
Carole McNall: ‘How do you walk back from that level of public anger?’ ›