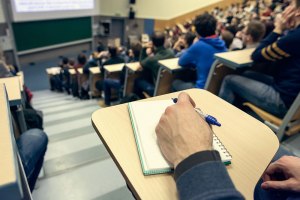 To send a chill through young journalism students, remind them on the occasion of their first class that they have chosen to become “enemies of the people.” I did just that in classes I’ve taught over the years since Trump ascended his jury-built throne. The reactions were much the same. They know of my reputation and looked at me as if I was just being what I’ve always been: outrageous in what I say (and sometimes do).

Doing these Trumpian days I’ve made sure to follow the assertion up with a genuine “I’m not kidding…really…not kidding.” Still, I am known for my sense of humor, once described in print by a colleague as “charcoal gray.” So they sometimes laughed, albeit nervously.

I don’t have data to back up what comes next; but I am convinced the craft of journalism is less of an aim for contemporary college students than it has ever been before. Consider the title: Jandoli School of Communication.  We used to be the Jandoli School of Journalism.

I’m OK with communicating and all that means in a college curriculum. If you choose to concentrate on public relations or whatever the hell “strategic communication” means, then go for it. If the singularly-commoditized world of sport is your sandbox, go play in it. If television “news” is your thing, then make sure you have enough pancake Number Three.

In a small university journalism program — even those that are accredited — I suspect there are percentage-wise fewer and fewer students who want to go into news journalism after they graduate. It was tough enough to get mom and dad to pay for a “journalism/communication” school with newspapers dying like flies, salaries lower than pennies under barstools and constant assaults on journalism from the White House and its minions.

I wish I had the answers. I wish I even had the right questions. I spent more of my career before teaching as a PR person, TV guy and sports flack than I did as a newspaperman. The latter is a dying breed, and so are we old guys and gals, whose memory of their first big story on a daily newspaper has stayed with us, etched into the thrills compartment of our brains.

I am apprehensive. No, make that frightened.

I accept that there are many new ways to deliver information to a willing public since I was a cub. I am not against technology, digital media, even brain implants, if they tell us the stories we need to know. But in their instantaneous distribution and ease of gathering information, they make it too easy to deliver superficials without the real stuff of which a story is made.

An earlier Journalism dean at St. Bonaventure, Lee Coppola, said loved he worked most of his career as an investigative reporter before launching into education. He was a reporter, he said, “because I could stand up for the people who didn’t have a voice.”

The voices, I am afraid, are not being heard the way that they should.

Paul Wieland, a longtime journalist, teaches in the Jandoli School of Communication at St. Bonaventure University.

Like Loading...
‹ Victoria Woodhull was one of the first trailblazing women in U.S. politics
CANCELED! Jandoli Institute to hold workshop for community groups ›