Home › Jandoli Institute › Like Writing History with Lightning: The Politics of Nostalgia and New Media

Like Writing History with Lightning: The Politics of Nostalgia and New Media

Al Jolson, a major Hollywood star, was one of several celebrities who visited Marion, Ohio, to endorse the Republican candidate.

If we think of Warren G. Harding today, even looking back on the 1920 election, he seems old-timey in his boater-hat campaigning from his Front Porch in Marion, Ohio –  more George Babbitt than Jay Gatsby. In silent newsreels, Harding looks like someone out of central casting for a Babbitt-style booster promoting home-town pride and old-fashioned values.

You might also think of Harding as the ultimate small-time crooked politician, a somewhat baffled philander in over his head as president. He is often quoted as confessing to William Allen White that it wasn’t his enemies that kept him again at night, but his god-damned friends. This image developed later, after his death, with the emergence of scandals. However, Harding’s image as a small-town booster, while grounded in the reality of his success as a newspaper editor and publisher (and ardent booster of Marion, Ohio), was a carefully crafted marketing effort that used the politics of nostalgia as the centerpiece of the 1920 presidential election.

Nostalgia is a product of modernity, of a changing society, the gap between how things seem and how we remember them, often manifested as a longing for a simpler time or lamenting the state of young people.

Politicians have long used emerging methods of mass communication to tap into this longing by voters. In 1840, William Henry Harrison ran hiLog Cabin campaign, which was built upon a contrived history of the candidate as a common man who favored log cabins and hard cider. In reality, he was a wealthy Virginia planter. Similarly, industrialist Mark Hanna boasted of selling Republican candidate William McKinley to the 1896 electorate like a bag of flour.

In 1920, Americans were tired of change and war, so Harding and the Republicans ran on a message of going back to the Good Ol’ Days. Indeed, Harding launched his front porch campaign by raising the United States flag that had flown over McKinley’s home. Harding was the new McKinley, and like McKinley, Harding’s campaign advisors sold this image to the voters using advanced techniques and technologies. This was true one hundred years ago and it remains true today.

For those of us sitting in the 21st century, it might seem odd that Republicans of the early 20th century would have crafted their campaign around a longing for the good ol’ days.  Some of that longing had an ugly side, with white voters longing for a time before the Great Migration and immigration from Southern and Eastern Europe had changed the nation’s demographic profile. While the 1920 Republican campaign reassured voters with visions of small-town America in contrast to the teaming cities, the nostalgia of campaign slogans of a “return to normalcy” and “America First,” it also used modern media tools.  Warren Harding’s victory over James Cox in 1920 was the first time that presidential election results were announced over the radio.

In the following decade of the Roaring 20s, RCA became the darling of Wall Street and a symbol of progress. Going forward, they could look to radio saturating society but radio was one of several new forms of media shaping how people thought about politics and history.

Going into the 1920 election, Americans historical memories were being shaped by media.  The movie Birth of a Nation (1915) is an interesting case study on the intersection of nostalgia, historical memory and new media. D. W. Griffith’s Birth of a Nation was based on Thomas Dixon’s controversial novel, The Clansman:  An Historical Romance of the Ku Klux Klan.  Dixon and Griffith consciously sought to change the northern understanding of the Civil War to one that was more sympathetic to the Confederate cause and Jim Crow.  Historians would later call this the Cult of the Lost Cause. 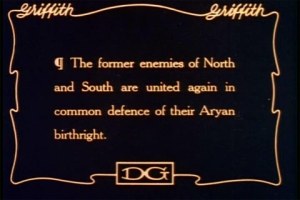 Birth of a Nation (1915) helped inspire a renewal of the Ku Klux Klan during the 1920s. It was a silent film. Audiences would read captions between scenes, such as the one above.

Dixon, who knew Wilson from his days at Johns Hopkins, lobbied Wilson to get his endorsement. Griffith’s interpretation of history and celebration of the Klan prompted protests, but President Woodrow Wilson ultimately showed the film at the White House.  While it is not entirely clear that Wilson uttered the famous quotation about the film being like writing history with lightning and being terribly true, Wilson did associate the presidency with the film, Griffith used that association to promote the film, and Griffith used quotations from Wilson’s History of the American People on cards shown in the movie. For the general public, the film’s interpretation of the Civil War as a valiant Lost Cause and the KKK as the heroes of Reconstruction aligned with President Wilson’s interpretation.

Wilson, Dixon and Griffith celebrated the Cult of the Lost Cause and embraced the interpretation that Klansmen were champions of southern white honor. Wilson’s election marked a milestone in reconciling the remaining wounds of the Civil War. Woodrow Wilson had been a scholar before he entered politics. He held a Ph.D., wrote books on politics and history, and rose to the presidency of Princeton before he ran for governor of New Jersey.  Wilson was also the first southern elected president after the Civil War, something that he pointed out when campaigning in southern states. Wilson spoke at the reunion of Gettysburg veterans in 1913, promoting the Cult of the Lost Cause and reconciliation as aging veterans picnicked.  To our point, Wilson the president and scholar reinforced the power of film, the new medium, to portray a version of history reinterpreting the aftermath of the Civil War so it aligned with the racial codes of Jim Crow.

The Great War, World War I, also saw a sophisticated use of advertising and propaganda to harness history to the purposes of politics. The Wilson Administration needed to rally a reluctant public behind the war effort and started a full-blown propaganda effort headed by George Creel and the Committee on Public Information. The Creel Committee used sophisticated marketing techniques to convince Americans to buy Liberty Bonds, support the draft, conserve food and conduct other acts of patriotism. Central to the effort was enlisting the help of Hollywood. Actor Douglas Fairbanks urged American to buy Liberty Bonds in public rallies held in front of the statue of George Washington on Wall Street. he volunteer Four Minute Men, replete in Revolutionary War garb, gave speeches in movie theaters urging support.  History was enlisted in the cause of patriotism and politics.

Just as neither of the major political parties have a monopoly on using social media today, neither did one party have guaranteed success in the past. Wilson might have recognized the power of propaganda to reach the public and of movies to shape views, but the Democrats in 1920 were not the party that took full advantage of the new media landscape. That fell to the Republicans and Harding.

Warren Harding campaigned from his front porch in 1920. It was the last of the front porch campaigns, meant to evoke nostalgia for normalcy and the McKinley prosperity.

The Republicans hired Albert Lasker, a major player in the development of modern advertising, to project their campaign. Lasker took an active role in crafting Harding’s image, including bringing the Chicago Cubs to Marion to play a local ball club and allowing Harding to toss out a pitch. Hollywood celebrities endorsed Harding. Mary Pickford and others traveled to Marion to appear with Warren and Florence Harding, waving from their porch and marching in parades. Al Jolson sang Harding is the Man for Us, both live for the Front Porch Campaign and distributed throughout the nation.  All of this, set against the backdrop of an old-fashioned Front Porch Campaign from small-town Ohio, crafted an image of American nostalgia that the entire nation could see. Sinclair Lewis might have condemned small-towns led by businessmen in 1922, turning Babbitt into an insulting term for boosters, but in 1920 Americans voted for a small-town booster who liked to bloviate.

As we consider the parallels between the 1920 and 2020 elections, it is worthwhile to think about how the media landscape changed during the 2010s. It is in this new media landscape that the politics of nostalgia played out. The smartphone, although predating the 2010s, reached commercial and social saturation in the United States during that decade. Social media has become the way we communicate. Facebook became available to the general public in 2006.

Consider the release date for these social media platforms:  Twitter (2006), WhatsApp (2009), Instagram (2010), and Snapchat (2011), for example, were built on top of platforms of Google, Amazon and Apple, whose reach (inside and outside the US) had expanded exponentially for several decades. Then there is the streaming revolution: Netflix, YouTube, podcasts, Spotify, and Apple music. The list is overwhelming. In short, a person in the early 2020s would know a very different media and communications landscape than a person in 2000.

The same could be said for a person living from 1900 to 1920. From our vantage point, the pace of change seems slower, but for them the waves of disruption were real.

Given this background, is it surprising that nostalgia and media play an oversized role in our presidential elections? Political campaigns can be about painting a negative image of the other side, but it is also about what voters want the country to be. The media landscape is the place where Americans merge history and politics, with the pace of change providing the means and the reason Americans turn to nostalgia.

Phillip G. Payne is a professor of history at St. Bonaventure University, where he has taught since 1998.  He is the author of Dead Last:  The Public Memory of Warren G. Harding’s Scandalous Legacy (Ohio University Press, 2009)  and Crash!:  How the Economic Boom and Bust of the 1920s Worked (Johns Hopkins University Press, 2015) in addition to articles on diverse topics.

Melvyn Stokes, D. W. Griffith’s the Birth of a Nation:  A History of the Most Controversial Motion Picture of All Time (2008)