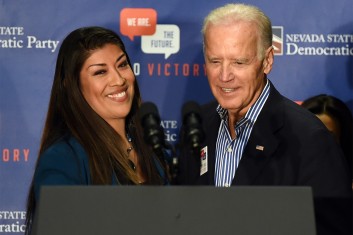 With the new legions of Democrats. we are being overwhelmed with candidates for president of the United States. Last time I wrote about the senior statesmen of the party, Vice President Joseph Biden, and suggested he was a man without judgment during his long career. Now we are seeing even more of that tendency with his hair-smelling, neck-kissing propensity from Democrat women who claim that they are offended by such activity.

There is a propensity of some politicians to get very gropy and physical with people, as if we want to be touched by strangers.I watched Bill Clinton do the same thing at fundraising events, until he hit the motherlode of Monica years later. Why is that sort of familiarity necessary in politics, academia and entertainment? Just shake my hand, please.

Some of my fellow liberals feel that it is good to have a leader with deep sentiments of fellow feelings.  Washington’s biographers tell how the great general was horrified when a colleague put his hand on the general’s shoulder.  He froze him with a glance.

One of the problems we face is that the president we have now is so abrasive personally that somehow people want a show a decency to overcome his psychotic behavior. They want some reaching out and a reminder that we are a decent people, not a continuing diatribe of nasty, remarks.

Lincoln said we should appeal to the better angels of our nature. That was what government want meant to be. Instead in this difficult world, we have a president who is pleased to teach how to hate.

Michael P. Riccards is president of the American Public Policy Institute and the author of 30 books including his two-volume history of the presidency, The Ferocious Engine of Democracy, and the forthcoming “Woodrow Wilson as Commander-in-Chief.”